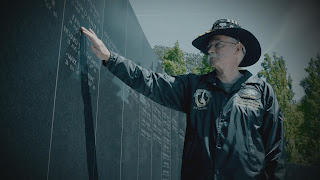 The Vietnam War is notorious for the rejection and disenchantment suffered by many if not all of its U.S. Armed Forces veterans. The New Hope Film Festival's Director of Submissions Thom Michael Mulligan happens to be one of them, making our organization highly attuned to the issues involved.

In this moving documentary, four Vets who belong to the New Jersey Vietnam Veterans' Memorial share their riveting stories for the first time. Director Tom Phillips has an impressive filmography, with many television producer credits for The History Channel, Discovery, Nat Geo, Outdoor Channel, Smithsonian, BBC, BBC Worldwide, Comedy Central, PBS and Smithsonian. The alchemy of such experience and war-related material is powerful and extremely worthwhile.

You can watch the trailer here: Vietnam Aftermath Trailer