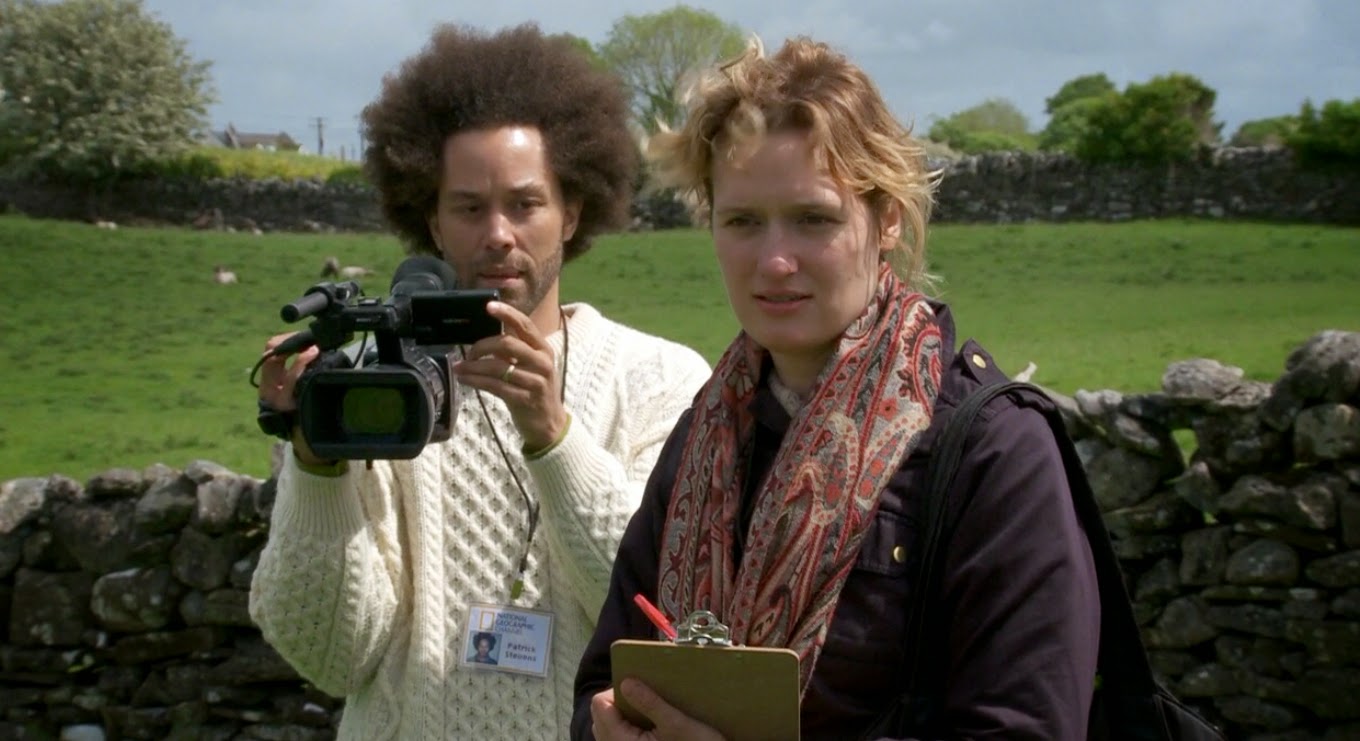 Lambing Season is the offbeat tale of Bridget, an American woman who travels to the Irish countryside to track down her long-lost father. Posing as a stranger, she embarks on a convoluted plan that leads to nowhere. That is, until nature intervenes to break the ice. Turns out father and daughter, although long estranged, have far more in common than biology.

Directed by LA-based filmmaker Jeannie Donohoe, who created the work for a Columbia University final project, Lambing Season is an authentic, tongue-in-cheek and thoroughly delightful escape into the Irish countryside, where magical things happen to those who know where to look. And Donohoe does: she shot the film entirely on location, and Ireland's naturalistic, intimate feel is beautifully captured.

You can watch the trailer here: Lambing Season Trailer
Posted by D. F. Whipple at 10:22 AM Inspired by true events surrounding a young, Hasidic Jewish man's efforts to smuggle ecstasy into the United States, The Tailor's Apprentice points a needed spotlight on a poison often associated with American youth. Debut producer and director Jeff Lehman does much more, however, as he plumbs the depths of a struggling father-son relationship—in what would seem an unlikely situation if it weren't based on a true story. The portrait of a stern but loving father who is as solid as a rock dealing with his lost, prodigal son will tear your heart with pain, because Lehman means business, and to his immense credit, he never flinches from his difficult material.

On the day of his mother’s funeral, a grief-stricken son is surprised by the last-minute arrival of his estranged aunt. When she objects to his inheritance of the heirloom family Bible, battle lines are drawn.

Much more is simmering beneath the surface; she is harboring a dark secret about the family—something the son doesn't know about his parents. How can he take this Bible when she is owed so much? She remains in great pain. How can he possibly give up this heirloom, at this time and place, in the midst of his pain, to an estranged relative who treats him with arrogance and contempt?

First-time producer/director Connie Wilkerson, an assistant professor in the Department of Film & Media Arts at the University of Utah, intensifies the story of a funeral and a woman's death with a long-buried issue that agitates the present, showing us how the consequences of actions can outlive their kindlers.

Here is the preview: The Family Bible Trailer
Posted by D. F. Whipple at 12:15 PM

Spirit of the Sato 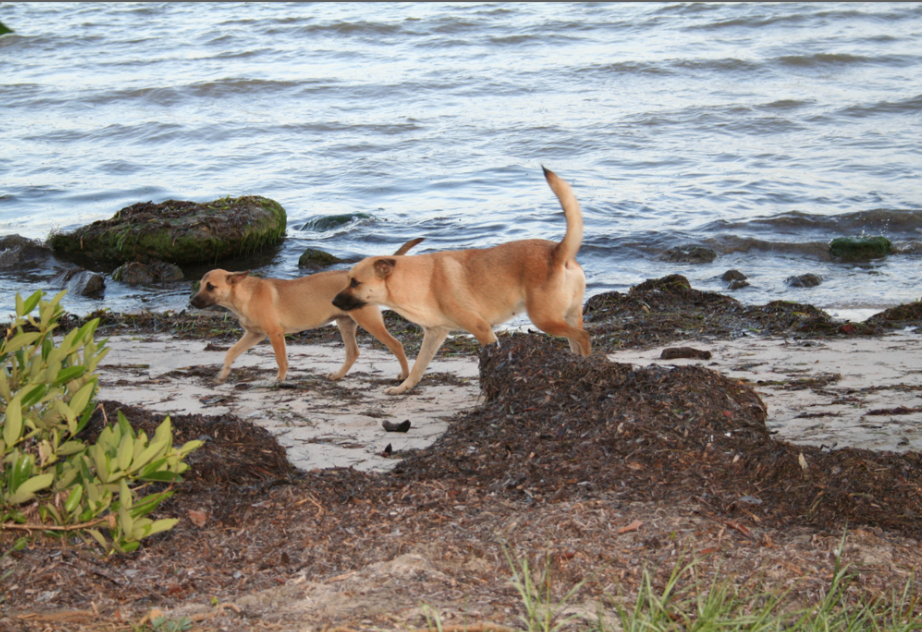 An estimated 200,000 homeless dogs spend their short lives on the streets and beaches of Puerto Rico, a U.S. territory. Project Animal Worldwide, which is based in Monmouth County, New Jersey, seeks to help these sato (stray, mixed breed) dogs through education, support, spay/neuter programs, and most heartwarming of all, through U.S. adoption.

The documentary portrays the plight of the satos and how Project Animal and animal welfare leaders in Puerto Rico are working together to help these abandoned and desperate animals. The film features a special appearance by renowned canine advocate Cesar Millan, who speaks movingly about the need for global spay/neuter programs in the context of 4-5 million dogs who are euthanized around the world annually—a sobering and profoundly sad statistic of 21st century life.

Spirit of the Sato is proactive and focused, yet its mission goes far beyond the boundaries of Puerto Rico—no doubt, pet abandonment is a huge problem within the mainland United States and elsewhere. This film is the product of a globally minded organization and individual. Ellen La Torre, President of Project Animal Worldwide and the film's director, asks her audience some important and probing questions. How do we foster caring and compassionate treatment of animals, especially those who are the most vulnerable and helpless, in a throwaway society? And if we can raise the level of human awareness and consciousness, what else can we do to make the world a better place for everyone?

You can watch the trailer here: Spirit of the Sato Trailer
Posted by D. F. Whipple at 2:47 PM

It's Chanukah in the New York apartment of an All-American, upwardly mobile couple. When the husband, Mitch, surprises his wife Ellie with the news they'll be returning to Buffalo for a job offer he landed, Ellie agrees, reluctantly, to abandon her acting dreams and go with him for the greater good of the marriage.

She is, after all, a traditional Jewish girl. The only thing that excites Ellie about this plan is the proximity of Buffalo to her favorite place in the world, a tiny amusement park called Candy Island, where she once forged glorious memories.

Once settled in their new home, with Mitch proving he's thoroughly a dud, Ellie does what she knows she must do: she picks up the local community paper, scouts out theaters, and goes for auditions. It's better for her, and if she can be happy again, the marriage will be stronger. Local theater has never been so dreadful, it turns out, albeit amusing and social, so this wobbly lifeboat she built for her marriage might, just maybe, keep Ellie and hubby afloat.

And it starts out that way, but her innocent dalliance with The Big Stage turns serious when she meets James, a smooth-talking and single director, who casts her in some very Off-Broadway roles. How will she juggle her now complicated life in a small city? And what will her return to Candy Island as an actress mean for her fate?

Written by Gail Golden, who might have war stories of her own to tell, and directed by Scott Andrew Kurchak, a Canadian citizen who lives in Buffalo, Give & Take is a delightful spoof on community theater—on how life unfolds at a smaller scale. The film mirrors its protagonist's vision because it, too, is the product of actors with a passion for production, in this case a first feature film.

In small town theater and independent filmmaking, the odds are long and the journey is never easy. New Hope Film Festival applauds this team for succeeding. 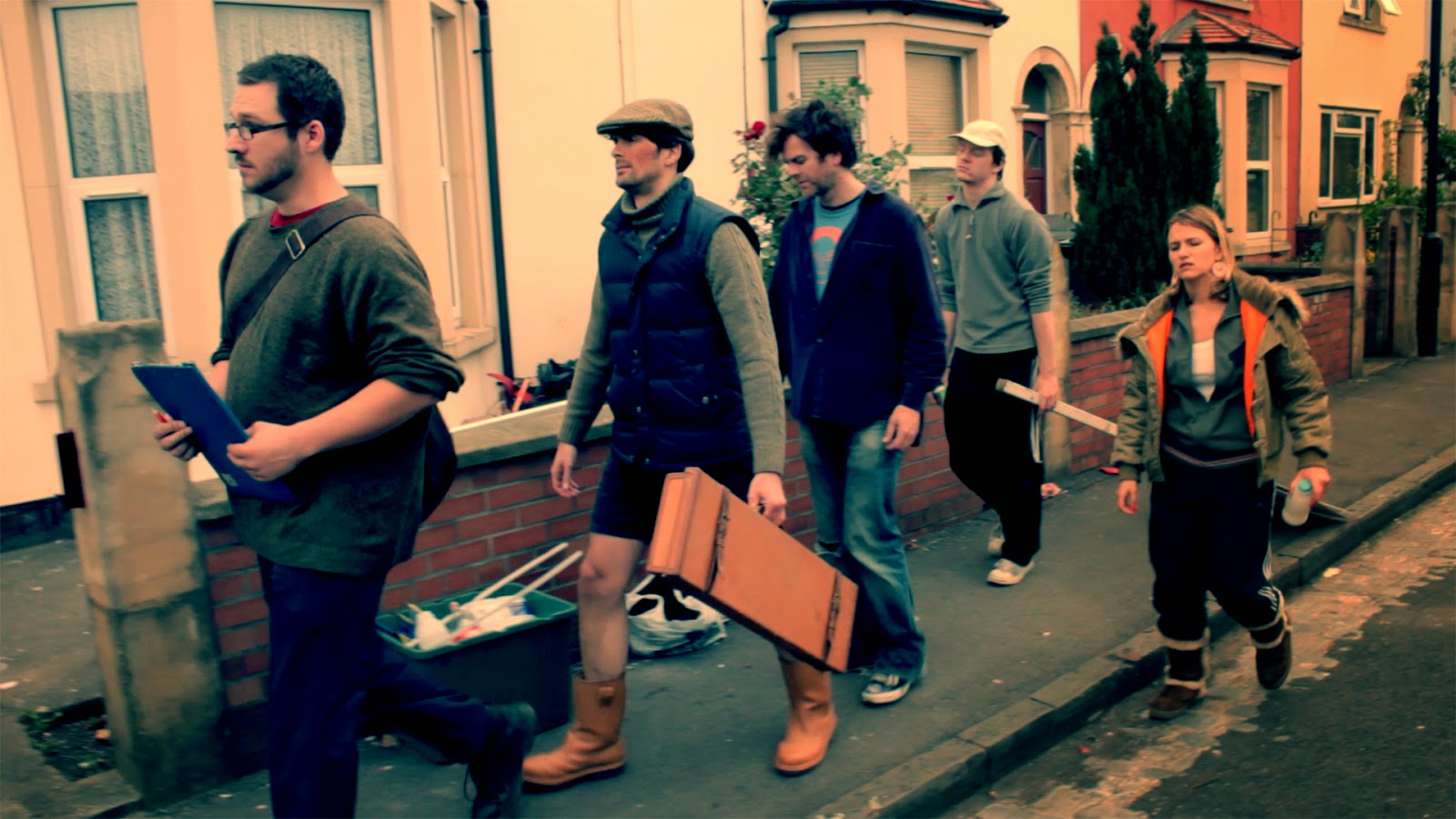 Wickedly offbeat humor is the host attraction in this mordant and subtle comedy from the Bristol area of England. Produced with loving care on a truly indie budget, the film marks a first feature project for writer/producer/director Patrick Blake.

In what can only be called a surreal and, shall we say, tall tale, a bumbling vicar leads an angry farmer, a suicidal anarchist, a clueless delinquent and his half-girlfriend on a witch hunt in some fields outside Bristol. What starts as a barely organized operation soon descends into chaos, and the anarchist, determined to leave this world on the same date he entered it, at last finds the anarchy he long lacked—all under the auspices of a church and a government community service program.

The result is hilarious, even if you're not laughing out loud. But there's much more than comedy going on here.

To wit, who are the anarchists, anyway, and what are the targets of Blake's satire? If a lone wolf in an impersonal world suddenly finds meaning in a lowly witch hunt, and a pillar of the community sees justice and salvation in it, then what, on Earth, are the authorities leading this charade all about? If authorities are fools at best and a radical ideology—the idea of burning the whole lot to the ground—offers no antidote, then everything is reduced to absurdity. The comic relief of human incompetence, the exposure of pure impulse and fantasy—these are the fragile structures that hold Blake's idea of civilization together.

And that is almost funny, too. You can watch the trailer here: The Anarchist's Birthday Trailer
Posted by D. F. Whipple at 12:26 PM

Telleth of Those Who Dwell in the Water 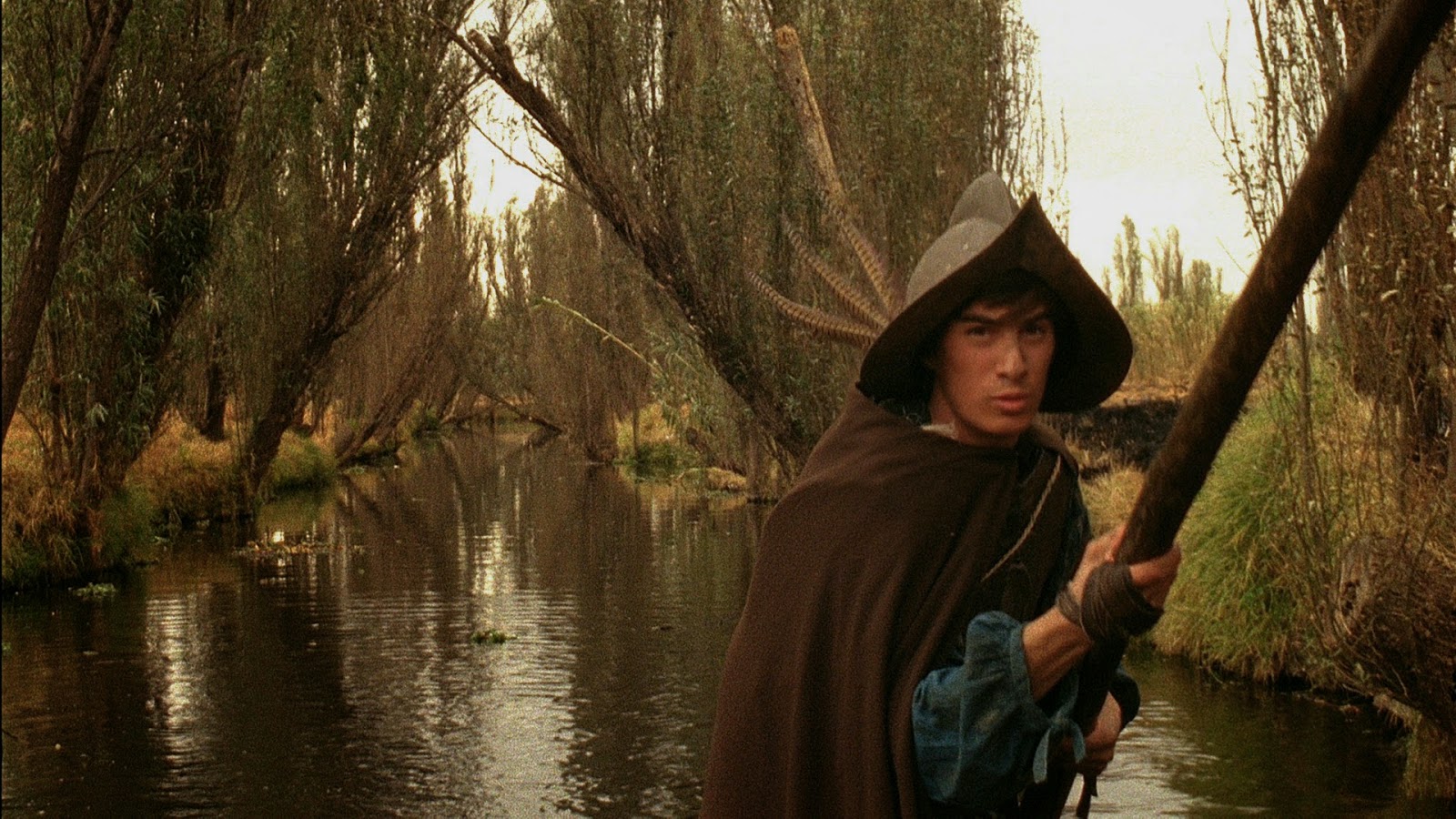 In this lyrically jaw-dropping period piece from Mexico City, a young man named Rufario Salamanca is sent to Nueva Espana (New Spain) in order to serve Friar Bernardino, whose lifelong mission is to document every, tiny thing that grows in the region. Guided by a mysterious native woman, and together with his mixed race brother and the friar, Rufario sails into swampy waters, finding marvelous beasts—all main characters of ancient pagan tales. One of these creatures, the axolotl, is of particular interest to him, for he finds in the myth of its creation an escape from what has long seemed an imposed destiny. His search for true identity crystallizes when he spies his reflection on the wise lakes of New Spain, where salamanders have chosen to be, but not to evolve.

Inspired by the writings of Franciscan friar Bernardino de Sahagun, De Sabandijas En El Agua (Telleth of Those Who Dwell in the Water) sinks deep into the soul. Mexican student helmer Roy Ambriz, who both wrote and directed the film, lulls you to sleep with a song—a strange, exquisite tune through which fantasy, and aspirations for heaven, are melded from art, to dream—to reality.

You can watch the trailer here: Telleth of Those Who Dwell in the Water Trailer
Posted by D. F. Whipple at 11:37 AM