Ausencio secretly nurtures his desire to one day become a drag performing artist. When a drag queen invites him to join her show and his father discovers his secret, he is forced to decide whether he will pursue his dream or remain on his family farm to fulfill what is expected of him. In the end, he learns that he doesn't have to leave all that is known to him to be himself.

This charming and thought-provoking film comes to New Hope Film Festival as a joint production that originated in Mexico and the United States, a fitting metaphor for warm relations between these neighboring countries. This is Executive Producer and Director Juan Gil Garcia's first project.


You can watch the trailer here: Un Buen Hijo Trailer
Posted by D. F. Whipple at 11:26 AM 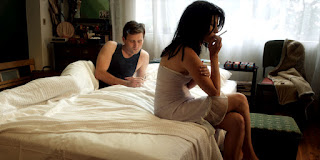 On the eve of moving into their new studio, Aaron, a struggling young painter, proposes his plans of giving up his art to pursue a normal, safe life with his fiance, Beth. But selfish actions soon threaten their relationship in this sophisticated and deeply psychological love story.


A first feature film for Australian director Shiyan Zheng, NHFF Official Selection Brush will screen at The County Theater on Tuesday, July 10 at 7:00 pm. Tickets are available through The County's box office. Come join us for this exciting world premiere!

You can watch the trailer here: Brush Trailer
Posted by D. F. Whipple at 6:24 PM

Empire: The Whitewater Story follows intrepid young filmmakers Daniel Doran and John Varga as they tackle the raging rivers of New York State. This bold and adventurous film showcases some of the finest whitewater New York has to offer, and in doing so, tells the story of a group of people who use New York State waterways as a vehicle to find the things that we all search for in life.

New Hope Film Festival is presenting this exciting and beautifully produced film at our special matinee price of $6.00 ($5.00 in advance and $4.50 in advance for members). The filmmakers will be here in New Hope to lead the Q&A afterwards. You can watch the trailer here:

Life Through a Lens

Here's my take on Life Through a Lens, another fantastic addition to the NHFF line-up.
It will screen during the "Mothers and Daughters," show, July 8th @ 12pm. To purchase tickets, follow this link.

Ellenor Argyropoulous’s Life Through a Lens follows shy Rose (Rowan Davie) as she makes her future daughter-in-law, Lilly’s (Lily Hall), wedding dress. By spending time with Lilly, Rose finds new confidence—not the overvaulting, conventional kind, but just enough. Just enough to do something different: to display the photos she loves, to try a new camera, or confront her past. Some of what the film has to say about bonds between women—that they are more intuitively, deeply felt than ties between women and men—is essentialist. This is also, though, one of the film’s most important effects. Life through a Lens passes the Bechdel test that most films (even award-winning ones) fail, and while that test is not strictly a barometer of quality, it does matter.[1] Argyropoulous not only treats female relationships with emotional intelligence and respect, but with a time investment rare even in independent cinema.

In its story and aesthetic, Life Through a Lens also captures the photographic image’s capacity to bridge gaps. Rose enjoys taking pictures, but seals the envelopes of her developed photos without ever looking at them. Her increasing ability to look at her work, talk about it, and replace pictures of strangers with those of her family is symbolic and psychological—it allows her to get to know a mother she never met, and integrate her past and present. There is also something so lovely about the director’s pairing of words like “chrysanthemum” with a sepia photo—throughout, the film’s mindful pairing of word and image allows the viewer to experience these elemental features of cinema in a fresh, light, and beautifully rendered way. It is refreshing to see technology, the filmic apparatus itself, as the conduit of human connection instead of a barrier to it—the unironic celebration of the photograph is what makes Life Through a Lens worth seeking out.


[1] A fascinating way to measure women’s systemic underrepresentation in film, this test was created by Allison Bechdel in her comic, Dykes to Watch Out For. To pass, a film need only include two, named female characters talking to each other about something other than men—most films, from Lord of the Rings to Up, fail. For more information on the test, and truly awesome film reviews and pop culture commentary check out: Feminist Frequency.
Posted by Sarah Leventer at 7:33 AM No comments:

I had the chance to screen some awesome short films this week, including Hath No Man, which will have its NHFF debut during the "Knocking on Devil's Door" group of films (called a show), July 13th @ 6:45pm.

I cannot recommend this movie highly enough, I hope you all get to check it out!

Hath No Man is an immediately engrossing film. In fifteen minutes, it does what other films cannot do in two hours: approximate war’s immediacy, vicserality, and even something of the spiritual. The film revolves around two soldiers, Pascal (William Emmons) and John (Lliam Murphy), and the image of hands on a rosary. The meaning of that image changes each time it is shown, and while revealing those shifts here would spoil the film, they demonstrate a masterful attention to detail and story.

There is nothing “student” about this film, nor do the characters feel like “short film” characters. They have histories and unspoken understandings, communicated in impressively nuanced dialogue and performances. The depth of Pascal and John’s characterization is all the more remarkable considering there are only three minutes of dialogue in the fifteen minute movie. Subtle movements, like the edge in John’s words or Pascal’s Gregory Peck/George Clooney smile, are all-important in expressing the soldiers’ intimate, rambunctious bond. This is to say nothing of the cinematography that turns flying particles, weeds, and dirty faces into things of beauty.

For anyone who is as bored as I am with ironic hipster nonsense, this is the film that will wake you up: the one that treats life with the fresh, honest engagement it deserves, without devolving into melodrama. It is the kind of film that reminded me why I love movies, and while I could write pages about it, the words that resonated through my mind after watching were simply “this is what film can do.”

To purchase tickets for "Knocking on the Devil's Door," (where Hath No Man will screen), follow this link.

Rich Cahill is a tattoo artist, painter, musician, and protester. After starting a successful chain of tattoo shops, Immortal Ink, Rich sold his business to start a fresh art studio and tattoo shop in nearby Frenchtown, New Jersey where he can express himself in his own unique way. The Tattoo Life is the story of Rich's career and a portrait of his life, all leading up to his Frenchtown Studio.

Directed by Jon Reino (Downward, Official Selection 2011 New Jersey International Film Festival and 2011 Cape May Film Festival), this slice of local, riverside, bohemian culture is screening on Saturday, July 14 along with films from New Hope and Lambertville. You can watch the 7-minute trailer here: The Tattoo Life Trailer
Posted by D. F. Whipple at 7:16 AM

The Ballad of Sandeep 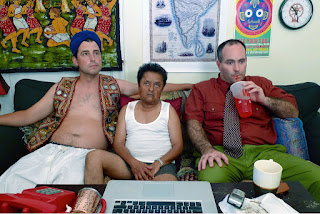 After his IT job is outsourced to Bangalore, Sandeep Majumdar (Deep Roy) sets up a remote access in his apartment, tricking his former company into believing that he is really working from India. Operating under the alias Sudesh Patel, he soon catches the eye of the company's vice president, who wants to promote him.


Anyone upset by Corporate America's outsourcing and downsizing epidemic will love this short film, which is at turns hilarious and sharply satirical. You can catch the trailer here:

Andy and Gordon, a middle aged gay couple, needed to decide whether to purchase a vacation home or adopt a child. They chose the vacation home. Now their life is an exercise in nurturing instincts gone wrong. When Gordon invites the newlywed couple from next door for dinner, both couples collide with realities they wish to avoid, leading to an explosive and darkly comic evening.

Returning Brooklyn filmmaker Marc Parees has an upscale and wonderfully comic touch, all of which is on full display in this GLTB short. You can watch the trailer here: Little Ones Trailer
Posted by D. F. Whipple at 5:55 AM

After completing a substance abuse program, Ringo vows to face the last thing that stands between his future and the past: his father.


Directed by Kevin Walker, this 30-minute documentary focuses on Johnson Cemetery in Camden, New Jersey, one of the poorest cities in the United States. Johnson Cemetery is the final resting place for over 120 members of the United States Colored Troops, the African American soldiers who fought valiantly for the North during the Civil War. Yet today, the legacy of these soldiers lies buried under dirt, debris and the detritus of the drug trade: Johnson Cemetery, long neglected, has essentially become a needle park.