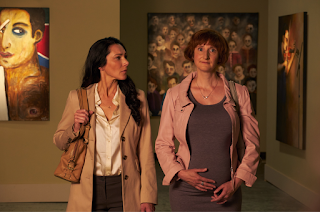 Yellow is the pilot episode of a seven part anthology series that immerses its audiences in all colors of the rainbow. With this beautiful vision as a focal point, the show starts in a most opportune place, a sophisticated and modern art gallery.
Creator, writer and director Sarah Deakins, a graduate of the University of Victoria Department of Theatre who was born in Wisconsin to British parents, brings a vibrant palette to her filmmaking craft. Her choices of lighting, color, and arrangement, and best of all, her intimate eye for the subtleties of acting, altogether lend warmth and spirit to a setting that is often felt as imposing and somber. Museums have the potential to evoke calmness, reflection and openness—a visit is a classic way to break the ice on a date—and Deakins brings this potential to full effect. Her international background begets a genuine appreciation for diversity, too, not just in character type but also in personality and tone.
This is a fine work. Yellow captures a moment in time, with the infinite yet subtle profundities that can arise from something as simple as sharing a selfie or wheeling a baby past great works of art. There is no discernible story arc as the film flits from one vignette to another, but then when you stumble upon a rainbow, you may have reached the end the story already. So you move on to the next color, expectant.

You can watch the trailer here: Yellow Trailer 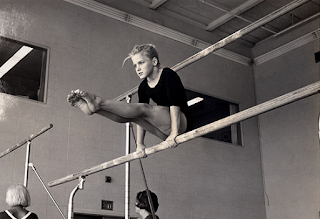 Many years ago, when a gymnastics coach asked filmmaker Paul Sheriff whether he was related to a once-rising gymnastics star, the only word Paul could summon was no.

Hali Sheriff's rocketlike career as a world-class gymnast began to escape Earth's orbit in 1966, as her dominance in all areas of the sport made her the frontrunner for the 1968 U.S. Olympic Women's Gymnastics Team. She was only 14 at the time: plucky, gifted and destined to make her mark, yet still devoid of the rich life experiences that surely would follow.

Hali's story ended right there. Instead of claiming Olympic glory, she faded into history, largely forgotten by all except family, teammates and those who follow gymnastics. You see, Hali died in a plane crash in the early summer of 1966. All six passengers on the small plane perished, including her mother and father.

Her brother Paul Sheriff couldn't muster the word yes when asked about his relationship to Hali because he understandably found the subject too painful. And hadn't his sister's life ended with an epic no, too, so could there have been a more appropriate answer in a grand, cosmic sense?

This documentary is a fine tribute to a young athlete who burned brightly, then disappeared into the stars, over 50 years ago. Hali tells her story here in absentia with the assistance of her brother Paul, who deserves special thanks for his everlasting devotion. You can watch the trailer here:

Sincerely and Literally Yours 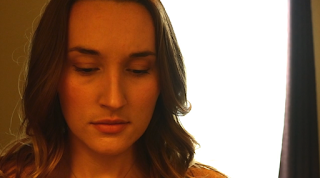 The feelings associated with emerging from self-isolation are nearly universal today, but one filmmaker has taken the realities of COVID quarantine to a level where we may not be looking—do we still love ourselves? Can a person who's been to the breaking point still say hey, I'm good, then look in the mirror and say "I love you?"

This is not a common experience I would wager, but student filmmaker Kimberly Hauser has asked the question for everyone through this tender film of the heart. Imagine discovering a letter from your younger self that you'd written before your life changed radically, and you may understand where the unusual twist in this short is going. I can't think of a better way to reopen the New Hope Film Festival than with a film shot in self-isolation, yes, but with a central character who possesses such a strong will to keep living and growing.

You can watch the trailer here: Sincerely and Literally Yours Trailer