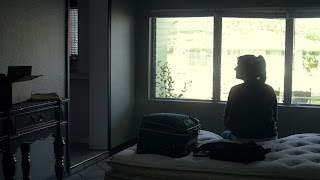 Emotionally and financially bankrupt, Michelle is out of options, so she's forced to call upon the one person she can't fathom facing — her mother. All she can do now is swallow her pride and pray that the loss of her house may finally lead her home.

Written by Laura Camien, who plays the leading role, and directed by James Felix McKenney, this sensitive, intimate short from Florida portrays a woman's relationship with her mother in a heartrending and contemporary way. Foreclosure is all around us now, and what are the emotional consequences? Does it repel people away, or can it bring a daughter and her mother closer together?

Find out what these filmmakers have to say by coming out to see For Closure. You can watch the preview here: 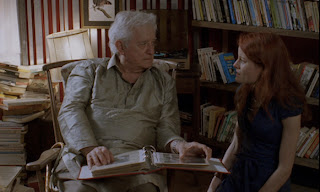 When Valerie, a young American actress in Paris, struggles with her role in a Moliere play, her older, French director insists she come to his home to work things out. His attempt to seduce her becomes entangled with her cynicism over a broken heart and the subtle, vindictive behavior of his Japanese wife. Cultural confrontations ensue, revealing more about love and life than either of them could have expected.

You can watch the trailer here: La Vie en Gris Trailer
Posted by D. F. Whipple at 6:04 AM 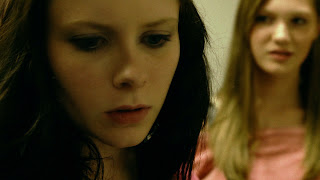 The Acadia Hospital in Bangor, Maine, in association with Project AWARE, produced this powerful, dramatic short film to raise awareness about teen anxiety and depression. The film follows the stories of Allie and Christian, high-achieving teenagers who are severely pressured at home and school. Maine high school students created the movie, and when you have gifted, young artists emoting about situations that adults often overlook, the effect is all the more searing.

Based on the true-life experiences of teenagers, The Road Back explores the stigmas attached to mental health issues. By sharing these thoughts and concerns, the film's creators hope adults and young people alike will be better equipped to recognize the signs of anxiety and depression and find help, because research shows that the sooner an individual receives support, the better the outcome. 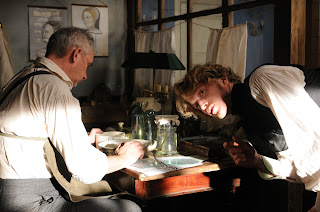 Based on Mikhail Lermontov's classic Russian novel, A Hero of Our Time, this arresting film by Moscow-based auteur Khrushch Roman is a smoky, contemplative journey into the human soul.

Our hero is dying on a rickety cart. The scene around him: nothing but desert. But the life he has led has been anything but barren. Hasn't it? A bon vivant and debauche who has lived only for the moment, he is suddenly grappling with questions that long evaded him: what is life all about, and because it only ends in death, are its trials and pleasures even worth the effort?

His past indifference to everything except himself, when contrasted with the surrounding, windswept sands that he will join soon enough, make him appear, on reflection, at best a greenhorn and a show-off. Pechorin deems this unacceptable. So, unable to lift his body a single piad, he will instead raise his spirit by choosing the final action of an intelligent, and indeed outstanding, man: to judge oneself without mercy.

When a likeable but lonesome man steps out for lunch, the outside world lurks menacingly: in his imagination, the plaza swarms with would-be crooks, hussies and criminals. What should have been a routine stroll develops into a dark odyssey, triggering a troubled conflict within himself and against the world.

German filmmaker Matthias Rosenberger has exhibited this quirky and beautifully produced short at over 60 festivals so far, and we're joining the fun because we love Spaghetti for Two. Check out the Spaghetti for Two Website and watch the trailer here:

This wonderfully strange and whimsical tale is another example of fine student filmmaking at New Hope Film Festival. Amy and A. Todd Smith co-wrote, produced and directed Mr. Bellpond as a Brigham Young University undergraduate student project, and their institution must be delighted by the outcome.

The main character is consumed with guilt and melancholy after his beloved wife disappears. The only thing that could disturb this once-celebrated playwright's world of sadness? News of his wife's whereabouts, which comes in the form of extortion.

Mr Bellpond must get this information, so he delves into his dark genius, once more, to compose a final masterpiece before the greedy tormenter burns whatever evidence that would lead Bellpond to his wife.

New Hope Film Festival 2013 will kick off with this film on Friday, July 12. Watch the trailer here: Mr. Bellpond Trailer
Posted by D. F. Whipple at 10:01 AM 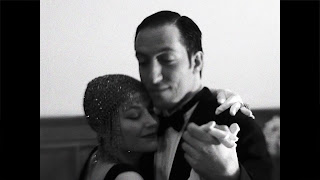 When a modern day researcher gains possession of a lost silent film, he becomes obsessed with the film's long-dead star, but things only get weirder from there. Producer/director Kevin Corcoran hails from neighboring Delaware County, and delivers a Pennsylvanian's respect for the past with a delightfully fresh twist. 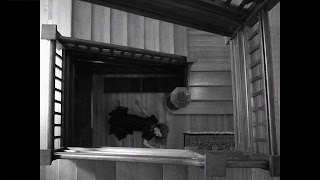 Magical realism and mystery abound in Kingdom of Shadows, a film where past and present intertwine. You can watch the trailer here: 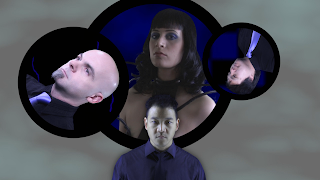 Hip, artsy and extremely catchy — we can't stop watching this music video at New Hope Film Fest! — Canadian pop artist Herman Wang's Life in Pictures has all the ingredients of a hit. You may note an influence from 1980s new wave music, and Richard Blade might want to take note, but this youthful, Toronto-based synthpop band is interpreting the genre in a fresh way, which is exciting for music fans.

We love the special effects in this NHFF Official Selection music video, and the group has something important to say about our modern world's obsession with two-dimensional, photographic imagery, but even after the final credits have rolled, the music stays with us. And Wang's piercing eyes.

Visit the Delica-M Facebook Page and watch the teaser here: 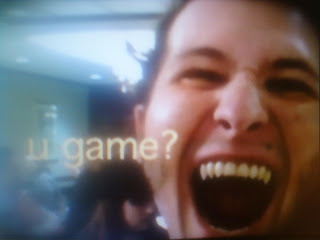 Produced as an undergraduate project in 2012 at University of the Arts in Philadelphia, Harvest is the story of a world-weary farmhand who encounters a supernatural event that forces him to reappraise his worldview. Writer, producer and director Reid Carrescia, who is based here in eastern Pennsylvania, brings a spiritual edge to independent filmmaking, and does so with a Keystone State sensibility and a keen eye for composition.

Local students who want to advance their own filmmaking crafts ought to come out to the Festival and meet Carrescia, who plans to lead a Q&A after the student film show in which Harvest is scheduled. You can watch the trailer here: Harvest Trailer

When Time Becomes a Woman 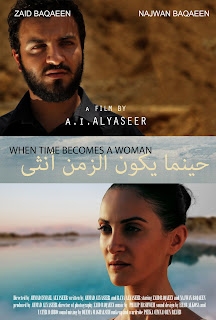 On the windswept, ancient banks of the Dead Sea, a man named Zad (Zaid Baqaeen) and a mysterious woman (Najwan Baqaeen) meet for the first time. Zad is a revolutionary whose past exploits, in hindsight, seem selfish and unimaginative — and this realization racks his soul.

She, in turn, is disillusioned by the gulf between his reputation, which she had long admired, and the humble reality standing before her. So she beseeches him to reflect, and in doing so, time becomes a woman, and a woman becomes time, and she becomes nothing less than a mirror through which Zad can see his own consciousness.

When Time Becomes a Woman is an intentionally minimalist film that focuses on dialogue and substance as opposed to any production technique that might distract an audience from the spoken word. Yet there are many twists and unexpected revelations; to a sensitive ear, there is nothing static about this presentation. There is movement in the breezes that sweep in from the sea, carrying dialogue, and thought, with them. In this remarkable and poignant first feature film, Jordanian director Ahmad Alyaseer tackles heavy material, in an unconventional way, on a shoestring budget — and succeeds, brilliantly.

You can watch the trailer here: When Time Becomes a Woman Trailer
Posted by D. F. Whipple at 5:07 AM 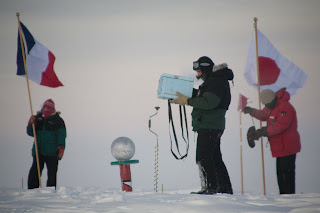 From summer to winter and back again, No Horizon Anymore takes you on a journey few have experienced. Fewer than 2,000 people have spent the austral winter at South Pole Station, but producer/director Keith Reimink transports you into this wondrous world where, with plenty of gorgeous footage and a touch of reality TV, he follows members of the winterover crew. 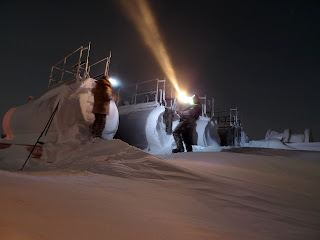 After a last sunset, the crew succumbs to six months of darkness. Certain levels of "toastiness" set in as routines are interrupted and limits are tested. 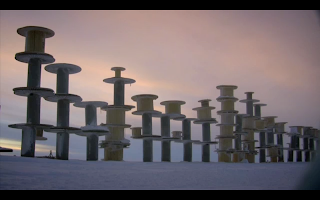 The only cure for claustrophobia: an unattainable, outside world. With rare footage of the austral winter at 90 S, this fascinating documentary is a must see for polar enthusiasts and adventurers alike.


You can watch the trailer here:

1890. The Deep South. Tension between whites and blacks is high in the shadow of the Confederacy's defeat. The young, American nation is industrializing, leaving many landowners who are bound to the old order feeling afraid and insecure. Racism and class warfare are dominant themes in society.

In the midst of this cauldron, Eve, a second generation freed slave, falls madly in love with Adam, the only son of a ruthless plantation owner. Adam's affections are reciprocal; they're determined to be together. The stage is set for a Legend of Love.

Filmmaker John Quashie has tackled heavy topics in this riveting and spiritual drama. Because he's based in modern-day Brooklyn, the verisimilitude of his work, and the immediacy of it, is all the more remarkable. Take yourself back in time with Legend of Love, and it will bring you forward to the present.

You can watch the trailer here (parental discretion advised): Legend of Love Trailer
Posted by D. F. Whipple at 6:24 AM