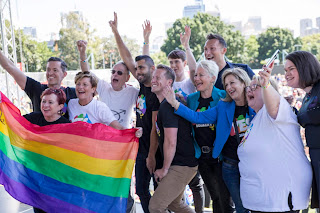 Continuing a long line of LGTBQ offerings at the New Hope Film Festival, Australia Says Yes tells the riveting story of the struggle to achieve same sex marriage rights in the land Down Under. Moviegoers may not be aware of Australia's lag behind other industrialized countries, the harsh criminalization of homosexuality and the degree to which politicos blocked the rainbow movement.

Through interviews and a variety of relevant footage, director/writer/producer Kirk Marcolina reveals in stunning detail the dignity, frustration and ultimate triumph of his country's LGBTQ community. This documentary is an important archive that deserves serious attention, but more than that it is thought-provoking and inspirational.

You can watch the trailer here: Australia Says Yes Trailer