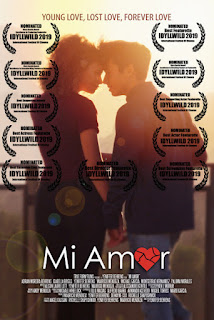 Set in Los Angeles, this involving and well-produced dramedy features two teenagers in the midst of a sensational crush. Both are intelligent and looking for a real relationship, and an extra dimension of commonality emerges when they discover their parents are both from Miami.

But there is more to their parents' back story. When Jonathan's mother and Raquel's stepfather bump into each other one day, quite literally, they discover they're not only from the same city. They also know each other, and the history isn't all honey and spice.

Director Yeniffer Behrens has a gentle, astute eye for relationships. You will smile and laugh with the characters of Mi Amor, and then you might feel unsettled—the shift in tone during this film is striking. And nothing is the fault of the kids. Behrens may be telling us that experience can and often does work against you in the cross-currents of love, yet when we allow ourselves innocence we can very much swim in it.

Director Olicer Munoz brought considerable inspiration, pedigree and experience to Nathan's Kingdom, a sci-fi coming of age drama about two siblings who chase a dazzling fantasy while fleeing social service workers. A graduate of Chapman University Film School with an M.F.A. in directing from the American Film Institute (AFI), Munoz incorporates Latino and social justice influences into his craft.

In the story, an autistic brother and opiate-addicted sister risk everything, including their lives, in pursuit of a fantastical vision they come to share, battling monsters both internal and external along the way. As their physical world merges with their fantasies, all things external become a means by which they conquer their demons—a shared experience through which their relationship grows.

The direction in this film is very strong and so is the acting. Nathan's Kingdom draws you in, not so much through enchantment and special effects, but through a magical realist's sense of how something quite out of this world can be grounded in reality. Lead actor Jacob Lince is on the autism spectrum, an unusual twist for such a significant production. Dallas native Madison Ford, who plays his sister Laura Freeman (Young Laura is played by Sarah Assumma), balances Lince's performance with a full range of emotions. Both actors bring depth and insight to their roles.

The excellence of this wonderfully progressive film is another feather in the cap for emerging director Olicer Munoz. This production also bodes well for the future of autism spectrum actors. You can watch the trailer here: Nathan's Kingdom Trailer
Posted by D. F. Whipple at 9:15 AM

Perhaps no war in history serves as a better metaphor for senseless killing than World War I—ironically also known as the Great War. Fighting for a flag without a clear cause on both sides of the battlefield, men were torn between following violent orders on the one hand and survival on the other. The stalemate and utter madness of it all led to many stories of camaraderie between Triple Entente (French, British, and Russian) forces and soldiers of the Triple Alliance (Germany, Austria-Hungary and Italy), almost invariably veiled over fears of getting charged with cowardice or treason.

Director Max Mason takes a hard but intimate look at these complexities in Their War, a superb short film with a keen sense of how far you can push soldiers into the pits of hell before they really fight, not against each other, but against the mission itself. For in the trenches of the Great War, deep down, most soldiers didn't want to kill their fellow man. They simply wanted to go home to their families with all limbs and faculties intact.

You can watch the trailer here: Their War Trailer
Posted by D. F. Whipple at 12:46 PM