Eight years into a childless and financially stressful marriage, Chris and Robin drive to another couple's gothic, upscale home in suburban Los Angeles for a visit. Upon arrival, they find the front door unlocked, and when Robin steps inside, her instincts tell her something is wrong. Their friends have disappeared without a trace, having left their car keys and cell phones in the house.

They search the house from top to bottom, and while it seems lifeless, the emptiness of the home, its dearth of sunlight, and the antiquated mosaic of objects and shadows that shape and haunt room after room collectively add to Robin's concern. Unlike her assumptive husband, she harbors a gnawing awareness: they have left their upwardly mobile life in LA for a realm of strange and unknown proportions, a place where the known rules of the universe no longer apply.

A boy is watching them. He plays tricks on them. He rolls marbles on the floor and toys with their minds.

Swirling into a black hole where everything she knows and loves is snatched, twisted, and inverted, Robin calls upon friends and strangers alike in ever-puzzling ways, only to learn that she, too, is an integral part of the maelstrom, a predicament from which there is no escape. With Primrose Lane, lead actor and director Kathleen Davison, who returns to New Hope after an award-winning screening in 2015, has not so much shot a film as woven it. An original story, an outstanding score and a multitude of visual touches are exquisitely fused into an eerie, sensory experience, one that questions the nature of one's existence.

You can watch the trailer here: Primrose Lane Trailer
Posted by D. F. Whipple at 6:45 AM

The Birth of an Artist

Cerebral palsy is a hard and relentless disease, but one filmmaker has captured an astounding response to the severe physical limitations it imposes. Dasha is a girl who paints with her feet. Despite her difficult circumstances, her mind's eye sees nothing but life and beauty in the world, and her feet are enough under her control to render her visions into glorious artworks.

The Birth of an Artist is an astounding and unforgettable portrait of courage. Born in Ukraine and educated, in part, at NYU Tisch School of the Arts, Graduate Film program, filmmaker Natasha Babenko is fascinated by duality, which in this case is her subject's "physical hardships intertwined with the beauty she expresses from within." But there is no duality for Babenko in terms of the merit of her film, because it is simply wonderful.

You can watch the trailer here: The Birth of an Artist Trailer
Posted by D. F. Whipple at 11:57 AM

A down-and-out guy, single, with introspective eyes and a hardened pall of sadness, wanders back to the small town where he screwed up. He visits this place every year to the same, circular effect, but this time is different when he meets a ravishing young woman whose bright expressions say "it's ok, I admire you."

She can relate, and as mature adults they immediately seize the opportunity to bond with a kindred spirit, both knowing that getting to know someone better over a game of pool is just the kind of old school therapy they need.

But something else is happening here. Something darker, even dangerous, is lurking behind an otherwise refreshing tale of Americana. Director Tim French brings out outstanding performances in his lead actors Hoyt Richards and Annabella Casanova in an indie gem that will intrigue and rattle you.

Intersection is soaring on the festival circuit, and for good reason. You can watch the trailer here: Intersection Trailer
Posted by D. F. Whipple at 7:11 AM 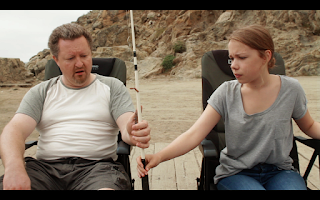