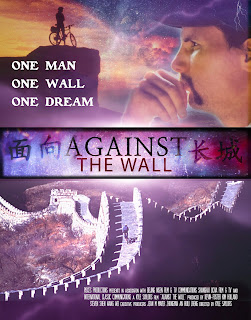 If you're looking for a fresh source of inspiration, this is your ticket.

At a perilous moment in his childhood, Kevin Foster was electrocuted with 65,000 volts and 30 amps, leaving him in a recumbent state. Doctors told his parents he would never walk or talk again; he would be an invalid for the rest of a likely-shortened life. But after several years of therapy, right at the time President Nixon opened the door to the People's Republic of China, Kevin somehow climbed onto a bicycle. It was a pivotal time for international relations and the youngster.

The confluence of events planted an idea in Kevin's head: wouldn't it be cool to ride his bike across the entire length of the Great Wall? It would be indeed, and 18 years later the Chinese government kindly granted Kevin his wish. The Great Wall is a national treasure to China and one of the great wonders of the world. To his credit, the previously unlikely athlete performed his feat with all the required diplomacy and grace.

Against the Wall auteur Kyle Saylors grew up in what he calls a dusty West Texas town and he dreamed of traveling the world. Now, let's set things right, folks think big in Texas. When Saylors learned about this giant achievement in China, he couldn't resist the chance to make a documentary, and it's easy for even a non-Texan to see why.

You can watch the trailer here: Against the Wall Trailer