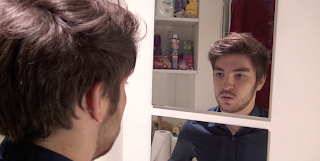 Student filmmaker Cody Noble produced this narrative short film while studying abroad at The American University of Paris. Kudos to him for taking the initiative while overseas; the adjustment to a new language and culture can be challenging enough without taking on a film project.

In the story, a young man feels social recognition only when singing, so one night at a party he spontaneously belts out a few bars of "Moon River." Although it's a hit from the early 1960s, and perhaps because it is, he immediately garners the attention of a young woman with whom he lands a date. All is well in Mathieu's life, but laryngitis derails his plans, leaving him wondering what in the world he has to do to fit in—and whether he should even try at all.

You can watch the trailer here: Moon River Trailer
Posted by D. F. Whipple at 8:13 AM