Song of the Open Road: The Story of the Southern California Youth Chorale 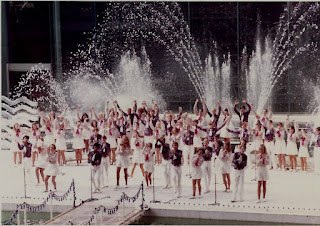 A high school music teacher named K. Gene Simmonds started the Southern California Youth Chorale in 1965 at the height of the hippie era. The counterculture movement hardly grew out of a vacuum, with cries of "hell no, we won't go" directly tied to forced conscription, a matter of life and death. There were other undercurrents, including less healthful ones such as psychedelic drug use and artistically-inspired ones like Beat poetry. And the entire cultural milieu, it has been argued, arose out considerably older zeitgeists from outside the United States, including the Mazdakist movement of Persia and the late 19th century German Lebensreform movement.

The Youth Chorale became an international sensation, so it's worth exploring these influences to grasp the scope of Simmonds's achievement and appreciate the context in which he created such an uplifting, healthy and positive force for bringing people from diverse backgrounds together. Artistic expression at its best is universal, and Simmonds put on a widely popular show.

This film project appropriately arose out Southern California, and LA-based Director/Producer Melissa Dowler has done a fine job of demonstrating why a youth chorale that flourished in the 1960s and 70s is both relevant and worth examining today.

You can watch the trailer here: Song of the Open Road Trailer
Posted by D. F. Whipple at 8:17 AM