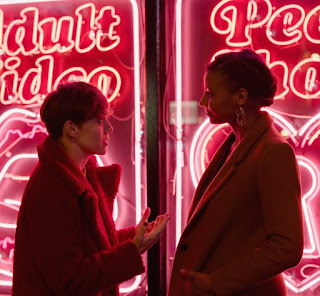 Ruby Welles is a thirtysomething woman getting by in London's Soho, the bustling West End area known for its restaurants, coffee shops, live entertainment and gay and lesbian bars. She happens to be lesbian and single, giving her plenty of material for her work as a stand-up comedienne.  To be honest, however, some of the quirky people flitting through her life are more exasperating than funny. City life can be wearisome after all.

Welles is played by real-life star comedienne Suzi Ruffell in an impressively nuanced acting debut. Director Mark Pinkosh is a veteran actor with credits going back to the 1970s, including a show many Americans will recognize, Charlie's Angels. His acting metier is fully utilized by a highly character-driven style, with excellent performances across the board.

The stand-up comedy theme and Soho setting are delivered with a concomitant touch of risquéness. By exploring such aspects of Welles's life, Pinkosh lends his lead character an added sense of need and vulnerability, making whatever small triumphs she achieves all the more meaningful.

You can watch the trailer here: Foreign Trailer
Posted by D. F. Whipple at 7:14 AM