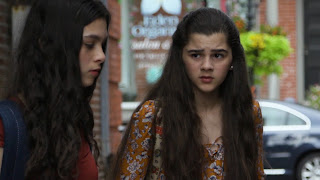 The New Hope Film Festival is a global event and all seven continents have been represented here. By the nature of the word global, any place of origin is considered with equal weight, and that includes a select number of fine films produced in our own back yard.

Shortcut is a locally-produced film that earns its place in a curated lineup of films from around the world. Bucks County has long been known for its artists, so it's really no surprise that good films are emerging from here. Shot on the sidewalks and alleyways of Doylestown, the county seat, this short by Pennsylvania filmmaker Pete Safran tells the story of two girls who find themselves face-to-face with a homeless man while taking a shortcut through town.

Movie fans in Bucks County have every reason to feel vested in this annual event despite the  participation of people from around the globe, as evidenced by Safran's heartfelt production. You can watch the trailer here: Shortcut Trailer
Posted by D. F. Whipple at 9:07 AM