The Heart of Camden - The Story of Father Michael Doyle 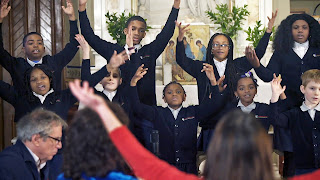 Dubbed Camden's Mighty Saint by a grateful, almost reverent community, Monsignor Michael Doyle is an Irish immigrant who came to America with a passionate desire to serve God and his community. And so he did, on a grand scale. While most decent people are charitable on some level, Doyle decided to settle in a place that evidenced sheer sacrifice—blighted Camden, New Jersey. It was a place few people cared or even thought about, so he amazed many people when he demonstrated that he not only cared, but he would also devote his entire life and career to improving the lot of people in this highly troubled city.

A true reformer and leader, Doyle launched local institutions that would leverage Catholic charity outside the structure of the faith. Heart of Camden, a non-profit serving the poor, is one example. Others include the South Camden Theater Company, because Doyle firmly believed in the restorative power of art, Nick Virgilio Writers House and Camden Fireworks.

Now the tireless man has gone viral, essentially, so his model for social improvement is getting widespread press and examination. Talk about leveraging the Catholic Church. The Heart of Camden - The Story of Father Michael Doyle has been accepted by ten festivals as of this preview and The Philadelphia Inquirer has declared it "a beautiful and magnificent film." Doyle can thank helmer Dr. Douglas Clayton for producing a documentary worthy of a lofty subject; so can the monsignor's growing, ever-exultant flock.

You can watch the trailer here: The Heart of Camden