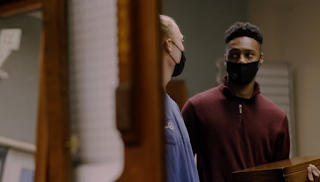 Filmmaker Jake Jurich wrote and directed this smart short film as an undergraduate student at Penn State, demonstrating that passion for making a quality film exists far outside the graduate film programs of large cities. This project began with an intelligent script, and Jurich continued to refine his work all the way through the thoughtfully-produced trailer.

In the story, Smitty has always had a practical, and one could say blind, attitude towards making money. His entry-level dishwashing job only adds to his impulse for more, even as a sober assessment of his stuck situation begs for seeking value, joy and self-worth outside material things. But when the misguided young man stumbles upon an upmarket silverware set, he finds himself questioning his beliefs, and that is where the attainment of inner wealth becomes possible.

You can watch the trailer here: Take a Little Time