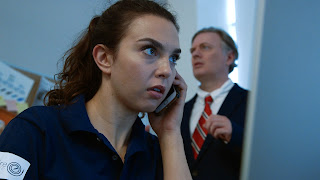 You most assuredly don't want to work at HighWire Cable, a telecom company from hell, but fresh recruit Beth Morrow hardly has a choice. She needs the job—they threw her on the team without any meaningful training or honeymoon period—and now she's stuck in her headset foxhole for better or worse. At least she's a fighter, and she will need every ounce of that spirit to shake off the incoming missiles exploding all around her.

A Brooklyn production helmed by indie writer, director and editor Brian Lederman, A New Voice is Episode One of a web series called The Calling. If that sounds a bit like the title of a horror film, you're not far off, but there is also something subversively funny about this crazy workplace. So crazy, heck, it might even remind you of a former job—or the one you have now.

You can watch the trailer here (parental discretion advised): The Calling Trailer