For Fear of Kofi 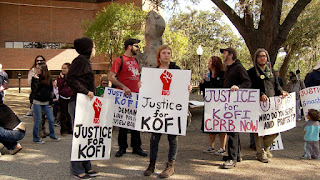 After the agonizing death of George Floyd rocked the United States, much was said and written about the case and its aftermath. The incident reached this level of acrimony not only because the video that spawned the backlash was hideous to watch, but also because the issue of police brutality against black men stands on the ground of a long, deeply troubled history.

For Fear of Kofi examines another previous, less publicized case of police employing violence against a black man under controversial circumstances. The incident took place in 2010 at a University of Florida graduate housing complex, and like the Floyd case, it rocked the media when a videotape emerged that contradicted the account given by police officers at the scene.

This documentary takes a hard look at the use of deadly force. At the same time, filmmaker Marina Petrovskaia does not engage in hyperbole. She is well aware of the toxicity and complexity of her material and she is not seeking to fan the flames of public opinion. She is after the truth and that, in any era, can be hard to pull from a violent conflagration.

So she interviews a variety of people, including the commanding police officer at the scene, and ultimately invites the audience to decide how the use of lethal force should be regulated and how excessive force could be avoided in the future. The world needs more people who seek constructive solutions to formidable problems, and Petrovskaia's probing, investigative and powerful film is a good step in that direction.

You can watch the trailer here: For Fear of Kofi