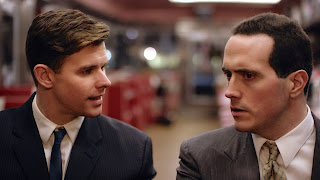 In his 2011 non-fiction book, Kennedy and Nixon: The Rivalry That Shaped Postwar America, MSNBC talk show host Chris Matthews writes about an encounter between two future U.S. presidents during a trip to Pennsylvania. The anecdote stoked the imagination of award-winning screenwriter and director Alfred Thomas Catalfo, who added a supernatural twist and created Split Ticket, a superbly directed short film reminiscent of The Twilight Zone.

Once upon a time, two rivals from different parties heading back to Washington after a debate settled a dispute in a collegial and good-spirited way—by drawing straws. Some observers of the current scene would say this plot element also belongs in The Twilight Zone. Despite the irony, tension runs high in this mind-bending thriller.

You can watch the trailer here: Split Ticket Trailer
Posted by D. F. Whipple at 10:34 AM