Of Knights and Slaves 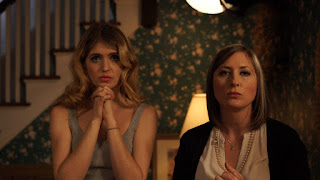 First dates are nerve-wracking experiences for teens, but parents are hardly immune from the jitters. Such is the setup for Of Knights and Slaves, a short dramedy that might leave you nodding from personal experience.

Director Adam Carr zeros in on a father's reluctance to accept his daughter's emerging maturity while also highlighting her date's lack of couth. Honking your car horn from the driveway instead of ringing the doorbell and introducing yourself to the parents is not the best way for a young man to make a first impression. The father feels he can artfully handle his daughter's date, having once been on the other side of the equation, but there is a decided lack of confidence in the air.

Independent films often explore unfamiliar territory, so it can be refreshing when a filmmaker creates something with a more universal spirit—especially when you're not quite sure how the story will play out. You can watch the trailer here: Of Knights and Slaves Trailer
Posted by D. F. Whipple at 12:22 PM