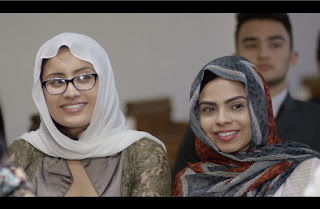 A graduate of New York Film Academy Los Angeles Campus who also holds an Excellence in Achievement Award from Middle Bucks Institute of Technology, student filmmaker Casey Hempel is a local talent done good. A devout Christian with an interfaith sensibility, she makes full use of her education, beliefs and hard-won craft in this faith-based story of love.

In her film, a couple with differing faiths and ethnic backgrounds becomes engaged, and while the bride-to-be's mother is over the moon with excitement, his parents, having lived most of their lives in the old country are, shall we say, less optimistic about the union. What is a happy young woman to do when her future in-laws are so resistant to her despite her most heartfelt efforts to win their affections?

Find out by watching this lighthearted and modern interpretation of an age-old theme. You can watch the trailer here: In Good Faith Trailer
Posted by D. F. Whipple at 8:50 AM