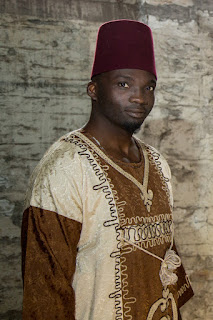 Occupied Spain, 2064. The great religions of the world are in open warfare. One brave imam has seen enough and wants to break the cycle of violence, but to do so he needs safe passage to Rome, where he will deliver a message to the Pope.

This is the intriguing premise for Reconquista, a short film adaptation of New Hope Film Festival's 2016 Best Action Thriller Script award winner. Writer and director George Reese is an entrepreneur returning to film and television after a 23-year hiatus. Too many filmmakers wait their entire lives for the Big Break that never comes instead of making their dreams happen. As today's filmmakers know, modern technology makes it increasingly possible to produce and distribute a quality film on a modest budget.

A hiring manager might not look at Reese's resume and peg him for directing a film, and that is the point. He hired himself, placing due value on a Kellogg School of Management education, a business background and early experience in Los Angeles as a production assistant, camera operator and editor.

In an era when even the best career is not completely secure, hiring yourself isn't such a far-fetched idea. You can watch the trailer here: Reconquista Trailer
Posted by D. F. Whipple at 4:06 AM