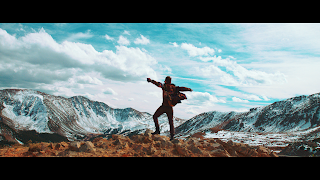 Take a trip of imagination and adventure in this vivid new indie feature from LA-based producer, director and writer Rick Darge.

The film centers around two friends, one who's life is enclosed and tormented by what one might call his limiting cognition, and the other a freethinker at a level that could be hazardous. Together, they spark a journey across wide open, American spaces, conveying freedom in a cinematically resplendent way while driving that thin line in the road between liberation and self-delusion. The lead character travels with the help of an exotic potion and a Volkswagen, but the film suggests that getting to a truly blissful place might require no more transportation devices than a will of mind and cognoscenti other than one's self.

There's a touch of surrealist painting in Darge's film, his first feature, as he unveils a kaleidoscope of sights, and with them, liberating truths, that lie beyond what the routine mind perceives. With periodic narration from British philosopher, writer, and speaker Alan Watts, whose background in theology and Asian Studies led him to cutting-edge ideas of mysticism and aesthetic fusion in the 1950s and 60s, the film also conveys a sense of intelligentsia, with Watts as both participant and otherworldly observer.

Zen Dog isn't a drug film or a pitch for LSD. It's something else, and that something else, lying just beyond the conscious mind yet paradoxically within your grasp, is what makes it so good. You can watch the trailer here (parental discretion advised): Zen Dog Trailer
Posted by D. F. Whipple at 12:21 PM