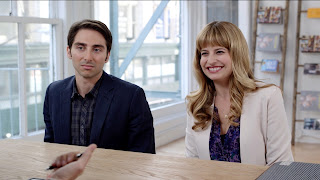 In this cheeky and high-spirited TV pilot, Nikki and Gerard, two struggling New York City producers, are desperate for a hit. Most of their rather humdrum options are likely to land them more rejection, and that is the last thing they need. They need something fresh. Something bold. Exciting—even risky, but with the potential to take off like wildfire.

They need it now, too, and in this urgent moment, only one, singular option shines through: build a reality show around Gerard's rich, playboy cousin. Their willing dupe readily agrees, and soon all parties are on the yellow brick road to stardom.

Enter the love interest. Even wealthy playboys can fall under the spell of a chaste stand-up comic, after all, and after this stunner enters the picture, there's no telling where this pilot is heading.

You can watch the trailer here: Reality Disorder Trailer
Posted by D. F. Whipple at 11:21 AM