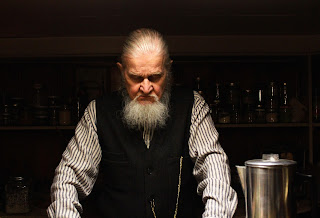 Based on the 1961 short story by Frederic Brown, this chilling neo-noire thriller centers around a clever druggist with a reputation that has brought him various characters, but most notably those with dark intentions.

The tale features one such character, Sangstrom, a seemingly ordinary man who comes to the druggist to request an untraceable poison, but finds out the hard way that murder will change him in ways he did not expect.

The Hobbyist is a short film that packs a big punch, blending the perfect mix of creepy and pleasing to match its dark yet purposeful message. With cinematically beautiful shots and a soundtrack that will keep you on the edge of your seat, The Hobbyist sets up a world in which morality can shine in even the darkest of places, and right and wrong can be taught in the most peculiar of ways.

You can watch the trailer here: The Hobbyist Trailer