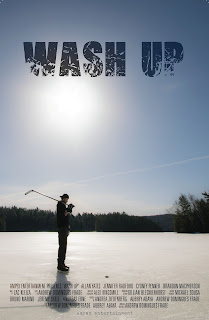 Many young people dream of making it big in the world of sport, but few have the chops to succeed. What happens when you lend your body, mind and soul to the dream only to fail? Pushing hard in a realm where performance counts above the myriad factors that would help you advance elsewhere, athletes often face an unsettling truth: they weren't born to do this. No matter how hard they try, the cards are stacked against them; they never even had a chance.

When this happens, the one person who brought you into this world, your mom, may be your only backstop, but she is also the last person on earth you'd want to look in the eye and tell you're a failure. Such is the layered and textured drama behind Wash Up, a thoroughly Canadian film with a heart of gold that will lift you up as much as it tears you to pieces.

Lead character Mason O'Brien, superbly played by Allan Yates, has just the downcast eyes and broken spirit one would expect from someone tossed out of the minors, but he still has plenty of fight in him. Actress Jennifer Redford delivers an MVP performance as Mason's strong and deeply perceptive mother, Jo, who would be the most steadfast winger the young man could have if only he would look towards her.

This is a touching film, and with the sublime Canadian outdoors as a backdrop and a concomitant score, it's somehow enchanting, too, in a manner unlike the sweat and drama of professional sport. Wash Up will resonate with any ambitious person who has fallen on hard times, because it offers a glimpse into how you can be a loser in competition yet a champion in life.

You can watch the trailer here: Wash Up Trailer