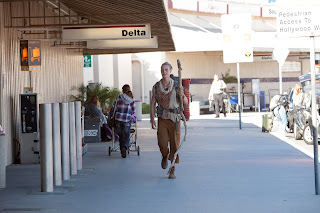 A couple with longstanding marital issues lands at LAX after a getaway in Europe. For a few years now, Stefania has been working a job she detests and Dan hasn't worked at all. Their palpable strain is only made worse when a vagabond, Ditlev Dharmakaya, asks for a ride to the busiest freeway in Los Angeles and Dan, much to his wife's horror, offers to take this total stranger home.

Ditlev is a ragamuffin in every sense of the word, and now that he's a third wheel, too, he has quite a challenge ahead of him because he's likely to be homeless again real soon. But Romanian-born director Elena Beuca has plenty in store for the childlike, wandering soul.

Although it's home to the only member of the Romance language family spoken in Eastern Europe, Romania's Slavic influences are manifest. It's not entirely surprising, then, that Beuca lends qualities to Ditlev reminiscent of Fyodor Dostoyevsky's characters Alyosha and, perhaps to a lesser extent, Prince Myshkin. That is, Ditlev is a pure spirit who acts as a conduit for something far beyond the material world. In further pursuit of this spiritual theme, Beuca also utilizes the motif of the wandering Buddha made famous in the West by German writer Hermann Hesse's 1922 novel, Siddhartha.

It's worth exploring such literary undertones to appreciate better what is less a dramatic film than a meditation on what is takes to banish conflict from your life and achieve nirvana. Fans of spiritual literature and grassroots independent film alike will find much to love in D-Love.

You can watch the trailer here: D-Love Trailer
Posted by D. F. Whipple at 12:08 PM