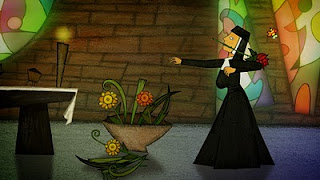 Told with a wry sense of humor, the story entails a chance occurrence and plenty of temptation taking place within an otherwise unassuming church. How will Kim's two protagonists, a father and a nun, handle their perilous situation?

Here's the teaser: Father and Sister
Posted by D. F. Whipple at 1:45 PM