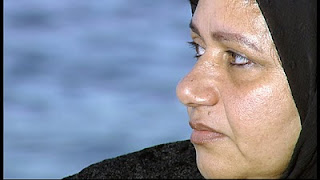 This 1 hour and 44 minute documentary tells the story of an Iraqi refugee, Amal Basry, who goes from watching Titanic in a Baghdad cinema to clinging to a floating body in the waters between Indonesia and Australia. Australian producer and director Steve Thomas and co-producer Kim Anning collaborated with their courageous subject in this North American premiere.

Here's the trailer: Hope Trailer
Posted by D. F. Whipple at 4:19 AM