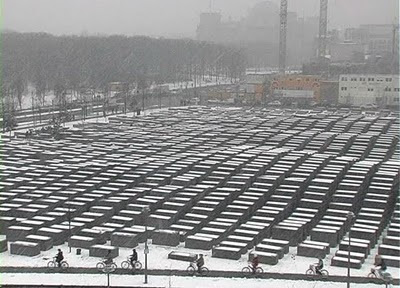 This deeply unsettling and penetrating documentary by German filmmaker Gerburg Rohde-Dahl involves conversations with Berliners during and after the construction of the Memorial to the Murdered Jews of Europe. Through her film, Rohde-Dahl reflects upon her family's role during the Nazi era and examines the broader significance of collective guilt.

American architect of the Holocaust Memorial, Peter Eisenman, has this to say about Expansive Grounds: "I must say it is the most moving and poignant film that I have seen using a project of mine as a backdrop for another narrative. I have shown it to several people who, in their own way, have been equally moved by it."

You can watch the trailer here: Expansive Grounds
Posted by D. F. Whipple at 2:39 PM