Red Dot on the Ocean 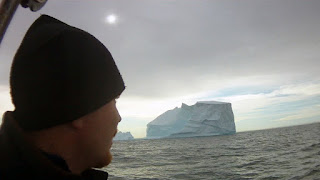 This fascinating documentary chronicles the ocean voyage of a formerly troubled youth as he reinvents himself on decidedly his own terms, despite the sober warnings of far more experienced boating experts.

Through the making of Red Dot on the Ocean, Matt Rutherford became the first person ever to sail alone, without stopping, around both Americas. His rickety, leaky sailboat spent the entire trip flooding, yet he managed to stay awake enough to prevent its demise. As a result of his herculean efforts, he also succeeded in bailing out more than his ride, raising $120,000 for disabled sailors. After 309 days at sea, he returned to a hero's welcome and a mere $30.00 in the bank. He then founded a non-profit that specializes in ocean research.

Matt's story demonstrates the power of the human spirit to overcome both nature's wrath and the demons within. You can watch the trailer here (parental warning for language): Red Dot on the Ocean Preview
Posted by D. F. Whipple at 9:02 AM