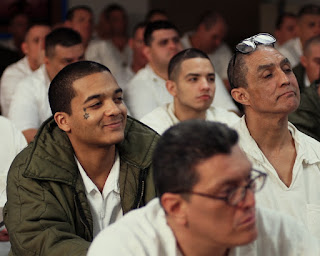 Mass incarceration has become a hot topic of debate in the United States, but if not discussed in a delicate way, the arguments on both sides can easily obfuscate the issue of how to prevent imprisonment in the first place. Or in the case of ex-offenders, how they can break the cycle of crime, never to set foot in a courtroom again.

Four years in the making, Inside Peace is a feature documentary that focuses on three hardened men who were incarcerated at Dominguez State Jail in San Antonio, Texas. There they embarked on a journey of self-discovery and change by enrolling in the Peace Class, one of the few self-improvement programs in the country that offers a new age path to finding inner strength, dignity and self-worth. Brought to the prison by Roberto and Chantal Piriz in 2007, this innovative effort to prevent recidivism is based on the work of Indian-American inspirational speaker Prem Rawat.

None of these three inmates ever realized he had the capacity to make positive choices in life until he entered the program. With a supporting cast of fellow inmates, prison officials, noted experts and family members, the film follows the trio's arduous road as they apply wisdom acquired in the Peace Class to their post-release world. Certainly, the men's lives on the outside are filled with conflict, rejection and hostility, yet faced with such obstacles, they must avoid their old ways by living with inner peace.

You can learn more about this cutting-edge documentary and the California-based filmmaker, Cynthia Fitzpatrick, who made it happen, by reading NHFF columnist Val Patterson's feature article, "Mind Over Matter," in the Festival's 2015 Program Guide. You can also watch the trailer here: Inside Peace Trailer
Posted by D. F. Whipple at 2:58 PM