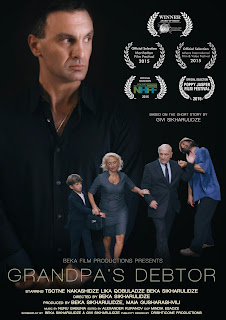 In this wry, Georgian comedy, a family of swindlers hunts down wealthy targets by combing newspaper obituaries. It's a good little business unless someone with equal cunning wises to their game.

Filmmaker Beka Sikharulidze, in his directorial debut, demonstrates the explosive potential of subtlety in Grandpa's Debtor. When the family's patriarch confronts a deceased man's grandson over a modest sum of money allegedly owed, no questions or defenses arise. Instead, the would-be victim deftly shifts the focus—incredibly, to the deceased. But can a person who lies in his coffin actually expose a fraud, and through it, the pettiness of a swindler's existence?