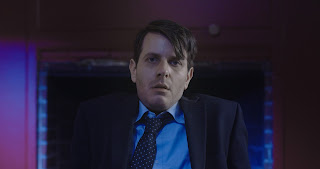 Experimental films are typically more experienced than understood, stirring up thoughts and feelings about a work uniquely for each viewer.

Wake is a surreal journey inside the unconscious mind of a young man. Two narratives run in parallel, with one involving him emerging from beneath sand on a beach while strange forces keep him shackled around the neck, and the other involving him watching static on an old TV set while an old fisherman evokes buried memories.

Cinematic excellence makes the whole experience a visual and auditory treat despite the pervasively depressed mood. The story arc of the tormented man's life is left a mystery, but some apparent realities seep through the crashing waves of his island-like mind. In the end, Director Brendan Kissane leaves much to the imagination, perhaps asking his audience members to probe deeper to dig out their own, buried truths. You can watch the trailer here: Wake Trailer