Angels of the Sky 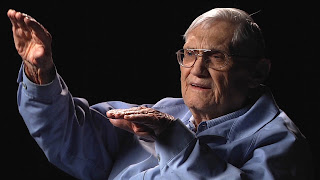 World War II pilots of the 8th Air Force were revered for their toughness and fierce dedication. If they weren't fatally shot or sent careening down to Earth in a ball of flames, they might make it back to base and live another day—maybe. Or they might, if they were half-lucky, get captured by the Germans and spend the rest of the war in a POW camp.

Angels of the Sky features intimate interviews of airmen who were shot down over German lines and taken prisoner. Now well into their senior years, they pry open their pasts, describing frightening experiences and documenting an historically pivotal era that is fading away at the rate of 750 veterans per day. Filmmaker Trent McGee dreamed up the idea for his film in 2011, feeling a sense of urgency about getting these stories on film before they could no longer be told.

Inspiring in the courage it portrays and revealing in the complexities it uncovers, Angels of the Sky is a must-see for history buffs or anyone who loves to learn about people whose experiences are unlike their own. McGee's interviewees are grizzled and wise, traits no doubt enhanced through many wartime terrors. You can watch the trailer here: Angels of the Sky Trailer
Posted by D. F. Whipple at 11:30 AM