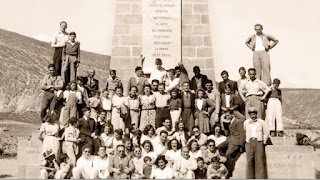 This beautifully produced film tells the story of European Jews who narrowly escaped Nazi atrocities by emigrating to Ecuador. Many of these refugees stayed in their new homeland to assimilate, build lives and contribute to the long-term prosperity of the nation, while others furthered their journeys to the United States, where they found opportunities more consistent with their educated, European backgrounds. The film documents the fates of many members of this group with impressive care and detail.

Writer/Director Eva Zelig, an award-winning filmmaker whose work has appeared on PBS, The Learning Channel, New York Times TV, ABC, National Geographic and Consumer Reports, already had familiarity with her topic going into this project because her parents were among the exiles depicted in the documentary. However, Zelig goes far beyond firsthand knowledge by incorporating interviews, archival studies, and other forms of meticulous research.

Anyone interested in this period of history, the peoples depicted and the cultures explored will find An Unknown Country rich and immersive. You can watch the trailer here: An Unknown Country Trailer
Posted by D. F. Whipple at 7:41 AM