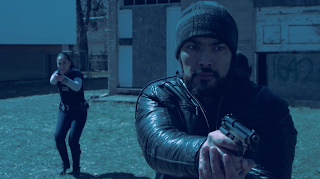 Completed in July 2015, Markham Tactical bears an uncomfortable resemblance to current events, raising the stakes in what is already a tense, action-packed film. Co-Directors Bayley Pokorny and Jeremy Earl are based in Chicago, where the latter works as a police officer. Their take on the day-to-day complexities, hardships and hair trigger decisions that necessarily come with a law enforcement career is sympathetic, yet raw, drawing a metaphoric thin blue line between reality and film, order and chaos.

The verisimilitude is uncanny when a fictional documentary film crew visits the police station in Markham, Illinois, where they've been invited in a bid to improve community relations. The station's outreach is an apparent success, but when a stakeout goes bad, the police are forced to handle an escalating situation while the cameras roll.