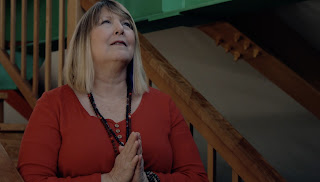 Co-produced by Paula Rossman and Shara Ashley Zeiger and directed by Jessica Alexandra Green, this disturbing story imagines a not-too-distant future where Roe vs. Wade has been overturned and women who are determined to have abortions are forced back into underground medical clinics. A female eye film that easily passes the Bechtel-Wallace test, The Red Lotus doesn't shrink from the eeriness of the circumstances—made even more so by the flaky exuberance of the clinic's supervisor.

A film like this one will get different reactions from an audience, and by dint of its nuance, The Red Lotus provides plenty of room for such interpretation. At the same time, the filmmakers make the tragedy of turning a healthful yoga retreat into a place where women abort their pregnancies, and the impact this place might have on otherwise law-abiding women, abundantly clear.

You can watch the trailer here: The Red Lotus Trailer
Posted by D. F. Whipple at 10:58 AM